News broke earlier today from CNBC’s Christina Farr that Apple, Inc. has a small team of engineers working on creating sensors that can “non-invasively and continuously monitor blood sugar levels to better treat diabetes”. The project is allegedly far enough along in development that Apple is investigating possible regulatory pathways and performing feasibility trials at clinical sites in the Bay Area.

The article suggests that the project is a wearable sensor (either inside or worn in conjunction with a future version of the Apple Watch) that can track blood sugar non-invasively with optical sensors, similar to how the current Apple Watch can monitor heart rate. Such a non-invasive continuous glucose monitor would undoubtedly be a “holy grail” for diabetes, but can Apple succeed where so many other companies have so far failed to deliver?

Just for fun, let’s brainstorm potential possibilities for what this secret Apple Project could be. We’ll sort them by order of plausibility.

One question underlying this whole scenario is whether or not Apple really wants to be a medical device company. As Tim Cook himself pointed out to The Telegraph in November, 2015: “We don’t want to put the watch through the Food and Drug Administration (FDA) process. I wouldn’t mind putting something adjacent to the watch through it, but not the watch, because it would hold us back from innovating too much, the cycles are too long. But you can begin to envision other things that might be adjacent to it — maybe an app, maybe something else.”

Interestingly enough, he does mention the possible for an Apple-made companion device or software to the Apple Watch that might be a health device.

Similarly, Verily (part of Google) has partnered with DexCom to work toward a penny-sized continuous glucose monitor that would be usable for both Type 1 and Type 2 Diabetes and not require calibrations.

Also, implantable CGM should be here soon (Senseonics is currently filing for FDA approval), which is inserted under the skin and worn for 90+ days. 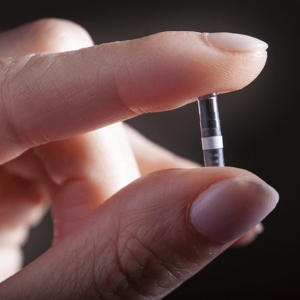 The common thread with all these devices is that they are invasive and all require some sort of display/reader to receive the readings.

Apple could potentially create an FDA-approved Healthcare-focused (as opposed to just fitness) Apple Watch “Pro” that is more robust and can communicate reliably with such sensors. If the wireless connection and stability of the device were medical-grade, removing extra middle-man devices would be a huge boon to patients. Users of such a “Pro” Watch might sacrifice some other features (small size?) or not get a model updated every year, but it would be reliable enough for medical use. (Such a health-stable PRO Watch would be quite useful for Artificial Pancreas projects too).

Most Interesting Possibility: Consumer-grade Optical (or Microneedle) Glucose Monitoring for Everyday Use

Combining my theory that Apple does not want to become a medical device company and the fact that accurate non-invasive glucose monitoring is a feat of titanic proportions, perhaps their top-secret glucose monitoring project is not for medical use at all.

As society becomes more health-conscious and sensor-driven, it’s only a matter of time before the general population starts monitoring glucose. In the diet and nutrition communities, sugar and carbohydrates have become the enemy, and some athletes (without Type 1 Diabetes) actually use invasive continuous glucose monitors while training to optimize their diet and exercise regimens.

Companies like Sano have been working toward non-invasive CGM for everyday use, and Apple has acquired companies (eg C8 Medisensors) working on various forms of non-invasive CGM. Some of these companies utilize optical sensors, and others use an array of microneedles to sample interstitial fluid.

With consumer-grade CGM, people could observe rough trends about their blood sugar. They’d be able to see first-hand how quickly certain foods (eg. cereal, white rice) can spike blood sugars, and how avoiding carbs can keep blood sugars relatively flat. Furthermore, widely prevalent sugar monitoring might not be accurate enough to dose insulin or diagnose diabetes, but it could help raise awareness and promote screening for Pre-Diabetes.

As an endocrinologist without diabetes, I’ve had the opportunity to wear CGM’s in the past, and they have been very enlightening. If I had the choice, I’d wear quite often.

Now this is clearly what the original source is suggesting, but I also find it the least likely. The article itself recognizes the immensity of this challenge:

“Accurately detecting glucose levels has been such a challenge that one of the top experts in the space, John L. Smith, described it as ‘the most difficult technical challenge I have encountered in my career.’ The space is littered with failures, as Smith points out, but that hasn’t stopped companies from continuing to attempt to crack this elusive opportunity.”

Much like Verily’s partnership to measure glucose levels via a smart contact lens, a non-invasive continuous glucose monitor from Apple would be mind-blowing. However, the diabetes community is well-aware of other longshots that have promised much, but never delivered. (Exhibit A: the GlucoWatch).

In addition to the technical challenges, I’m also not sure what Apple’s end-game with such a medical device would be. Would they try to carve out their own niche in the diabetes glucose monitoring space, taking on Dexcom and Medtronic? Would they license their technology to these companies? Would they try to market directly to consumers?

All that being said, I am extremely excited that Apple is focusing their efforts and resources on glucose monitoring and diabetes. I can’t wait!