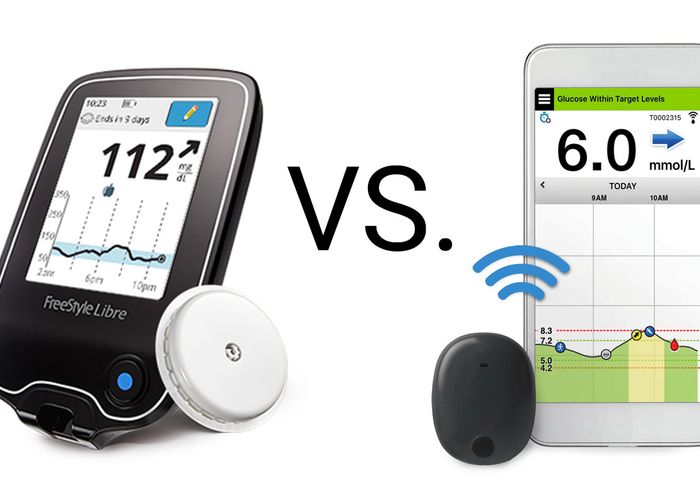 Two new CGM systems just hit the market – the Abbott Libre and the Senseonics Eversense.  Steve and I tested them both and want to share our experiences.  I’ll go first and talk about the Eversense.

This is an implantable CGM system that is currently approved in Europe (not yet in the US) that I actually had implanted in Lisbon when I attended the EASD meeting last month.  I was given directions to a diabetes clinic there (which was just cool to see), showed up when they told me to show up, and had the device placed!  The procedure takes about five minutes and involves getting a short incision in your upper arm and then a small, rod shaped sensor (about the size of a thin Tylenol tab) is placed just under the skin.  I was concerned that with my sculpted triceps, the insertion would be difficult but it went super smoothly!

The sensor sits just under your skin and can stay there for anywhere from 90-180 days (recently approved for 180 days in Europe).  You have to place a transmitter on your arm over the implanted sensor, which is a fairly flat black ergonomic device with adhesive on the back.  It’s probably the size of two quarters put together but rounded and smooth.  This transmitter powers the implanted sensor and also sends the CGM information to an app on your phone.  After insertion there is about a 24-hour one-time “warm up” period. Then you can start entering calibrations (twice a day) and you’re off and running until you get a new sensor placed.

So what do I think?

Hopefully, it will be available sometime next year in the US, but not every endocrinologist will be placing these, so you might have to seek out one in your area who is doing it (and hopefully somebody who does a bunch of them).  My overall take on it is that it definitely has its pluses and minuses.  My hope is that this will be an attractive option to some folks and expand the number of type 1s we have using CGMs, which is sadly still pretty low (only about 20%!).

And now here’s Steve’s take on the Libre Flash: 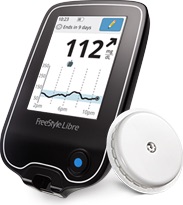 I recently had the opportunity to try the Libre Flash that was just approved for use in the U.S.  One Saturday night after a TCOYD conference, my good friend and fellow endo Ian Blumer slapped the Canadian version on my upper arm with the auto-inserter and soon I was swiping away. The U.S. version has a 12-hour warm up time and lasts 10 days.

For those of you who have never heard of the Libre, you must be living in a cave, kind of like when I first met Jeremy a few years ago and he was still on NPH, not knowing about CGM, etc. I found this device to be very impressive.

The Libre measures glucose continuously but you only get a value when you swipe it. It does give you the values immediately over the previous several hours and displays a trend arrow as well. The “swiper” is light and easy to put in your pocket and you can swipe over your clothes any time you want. Or…you can take off all of your clothes to get a glucose value, too!

The obvious issue is that it does not have alerts and alarms, and the data does not go to the cloud for sharing with others. I personally rely heavily on alerts and alarms to pick up my highs and lows early and to share my values with friends (Jeremy, Irl Hirsch, Bill Polonsky, my GF Jamie, and Shana) so that they are alerted when I get below 55mg/dl. I love getting texts from Jeremy that say “get your sh*t together!” when I am having a roller coaster of a day.

That drawback out of the way, there is something to be said for the simplicity of the Libre.  It goes on with a snap, starts working in 12 hours and no calibrations are required.  It’s really hassle free, so it may attract a number of type 1s.  Again, the lack of alarms concerns me for type 1s in keeping them in a safe zone, so I do think of it more as a device for type 2s at this time.  But, like Jeremy said, more options can hopefully expand the number of folks we have on these very, very important devices.

Kudos to Abbott for developing an excellent device!