Tips for Type 1s on SGLT2s 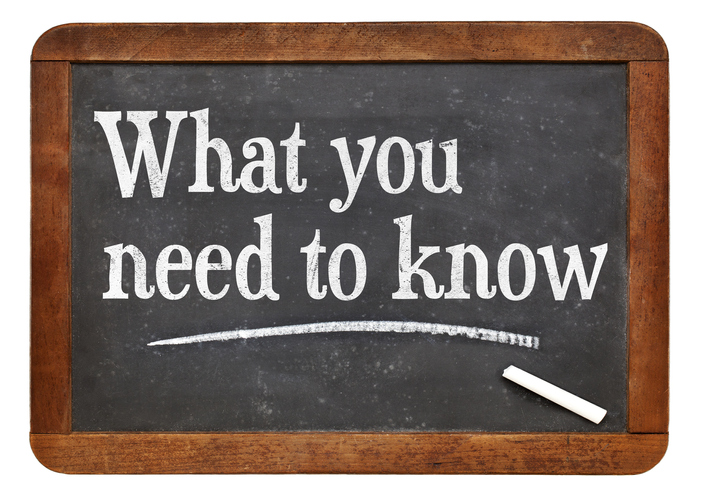 SGLT2 inhibitors are oral medications that are currently only approved in the U.S. for people with type 2 diabetes, but they have been recently approved in Europe and Japan for people with type 1. You may have heard of some of these drugs – a couple of the more common ones are Invokana, Jardiance, Steglatro and Farxiga. A lot of people with type 2 use them because they have several great benefits. In the small print on the bottle it says “not for people with type 1” but I’m here to tell you, they might be. A lot of people (including me) hoped the FDA was going to approve them a few months ago, but unfortunately they were denied (hopefully only temporarily). I do think they will be approved eventually.  In the meantime, lots of people with type 1 are using them “off-label”, which just means taking a drug in a way not specified on the FDA-approved label (but it’s still legal as long as the prescribing physician feels it is safe and effective for any individual patient).

How do SGLT2s work?

These types of medications work by making you purposefully pee out sugar. We’ve always been taught that sugar in the urine is a bad thing indicating poor glucose control. When we eat, our kidneys are constantly trying to hold on to as much sugar as they can because in normal amounts it is energy for our bodies. But these drugs block the kidneys’ ability to reabsorb the excess sugar in our bodies, so they are purposefully releasing some of it out into the urine. When that happens there is less sugar in your circulation, so your blood sugars are better, you have a better A1c, and better time-in-range (percent of time your blood sugars are between 70 and 180mg/dl). You’re also peeing out calories so you lose weight on these drugs. How much sugar are you peeing out? About 80 to 100 grams or so, which can be about 400 calories a day. The drugs can also lower your blood pressure a little bit because they are diuretics. Blood pressure may come down 3 or 4 points so they are not official blood pressure lowering agents but they can help.

Here are the main advantages:

In a nutshell, your blood sugars will be better with less work. You can liberate your diet a little bit and the medication may give you a nudge in the right direction and re-motivate you.

Here is an example of glucose variability before and after taking an SGLT inhibitor in type 1 diabetes: 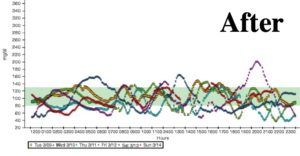 So what’s the catch?

The main side effect of these meds is the increased risk of diabetic ketoacidosis (DKA). In one study, about a half of a percent of people on a placebo went into DKA, and about 4% of people on the drug went into DKA. That means 96% of people didn’t have issues, but there is a several fold increase in DKA when you go on the drug. It doesn’t mean it’s a super high risk, but it does increase the chances and this is what led to the delayed approval by the FDA.

In another study, a bunch of type 1s all on pumps were brought into a clinic and their pumps were removed for six hours to see what would happen.  One group was on an SGLT2 inhibitor and one group wasn’t. The group NOT on the drug saw their blood sugars go up to 300, which would typically be a warning sign that something’s wrong.

But the people on the SGLT2 inhibitor only saw their blood sugars go up to about 194 because they were peeing out sugar. So if you were in the group on the drug and saw your blood sugar at 194, you might just keep going about your business until you have developed some of the symptoms of DKA such as vomiting. The medical phrase for having DKA with sugar levels not too high is “euglycemic DKA”.

This is why people go into DKA. You lose that biofeedback insight and you have to rely on symptoms. Your blood sugars might not be high, but you have to pay attention to how you feel – nauseous, achy, etc. This is why checking ketones is so important.

Also it is important to know that high blood sugars do not cause DKA.  What causes DKA is a lack of enough insulin, and the high blood sugar is a signal that you’re probably not getting adequate amounts.

So how do you stay safe if you go on these drugs?

Start (and maybe stay) on the lower dose. There are four drugs on the market for type 2 and they’re all flozins (canagliflozin, dapagliflozin, ertugliglozin and empagliflozin). All come in two doses – a low dose/starter dose and a higher dose. I would start with the lower dose and maybe even stay there because as you go to the higher dose the benefits don’t increase that much, but the risks go up for DKA.

Buy a ketone meter and learn what the results mean (see chart below).  You only will need to check your ketones when you’re having symptoms or feel like something might be wrong.  When you get the meter, test your ketones a couple of times in the morning before eating just to get an idea of how to use it and what your baseline values are before starting the medication.

0.6-1.5 = You have some ketones. Injest 20 grams of carbohydrates, give bolus insulin via injection (change pump site if needed or suspected of leaking). Check blood glucose and ketones every 1-2 hours. Drink lots of fluids (1-2 glasses of water every hour at least).

>1.5 =  There’s a problem – in DKA. Try above measures. If you’re vomiting and cannot hold anything down at any time, go to the ER!

The primary treatment for DKA is fluids, however insulin and taking in carbohydrates also helps to stop the ketone production and reverse DKA. If you’re vomiting and you can’t hydrate, once again you need to go to the ER because they can give you fluids and insulin through an IV. And if you start having symptoms whether you’re on one of these drugs or not, this is good overall DKA education.

Check your ketones any time you have symptoms even If your glucose levels are not high.

Here’s a full list of DKA signs and symptoms:

Avoid super low carb/keto diets if you go on these drugs. You need to eat enough carbs to require some bolus insulin at each meal.

Do not start these drugs if your A1c is over 8.5% because you probably need more insulin to begin with.

Stop taking these drugs when you’re sick (cold, flu, etc). Typically when you are sick your body requires more insulin than normal and if you get behind in your insulin needs and you are on a SGLT2 inhibitor, your risk for DKA may be higher.

Never omit insulin if you’re on one of these drugs. Sometimes people may consider basal insulin enough, but blousing is important to make sure you have enough insulin on board . The people who go into DKA on these drugs tend to be people who are on pumps. The people on injected basal insulin tend to be a little more protected because you take your one shot of Lantus or whatever and you have insulin that’s working all day long.

I’ve probably scared the crap out of you with all this talk about DKA, but I do feel it’s a very low risk. Personally I haven’t had any patients who have gone on the medication and had DKA. The rates of DKA were much higher before we knew it was a problem, and now we can educate people to recognize it early and treat it appropriately at home.

So keeping in mind all the positives of these drugs, I’m a big believer.  I think they can help a lot of people, and it’s just knowing the risks, accepting them or not for yourself, and being smart about how to triage.

If you want to give this medication a try:

Whether these drugs make a big dent in improving diabetes control in type 1 diabetes or not, what they have done is started this conversation about DKA in general, which is incredibly important so people are aware of the signs and symptoms and can take measures to treat it before it gets too far along.

If you haven’t yet seen our Edelman Report debate, check it out here.