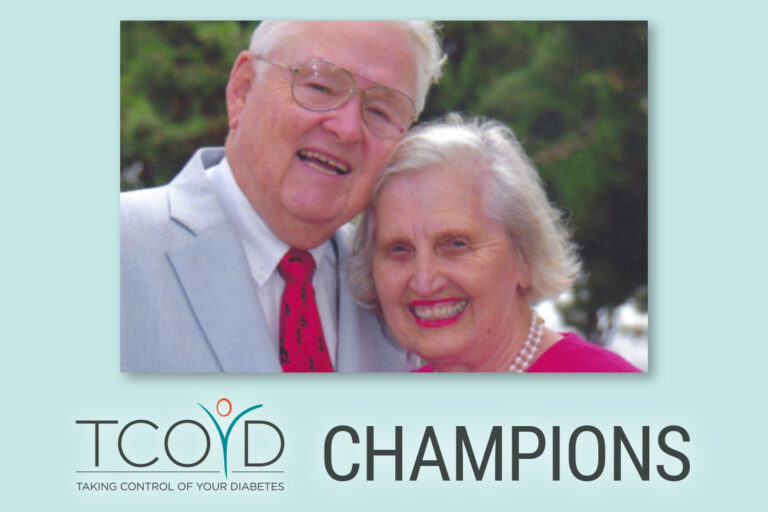 When Barbara Groce showed symptoms of diabetes at age 65, five different endocrinologists took one look at her grey hair and told her she had type 2 diabetes without any further testing. At the time, Barbara didn’t know the difference between type 1 and type 2, but she knew something wasn’t right with that diagnosis. Several weeks later when her blood sugars were still not where they needed to be, her doctors told her she was “non-compliant”. For a teacher with a master’s degree in educational administration from USC, “non-compliant” isn’t part of her nature.

Barbara shared her symptoms and frustrations with a nurse in another medical department who happened to be the daughter of TCOYD’s former Executive Director, Sandy Bourdette. Sandy’s daughter told Barbara, “You have to see Steve Edelman right away!” Barbara and her husband David went to a TCOYD conference and met with Dr. Edelman soon after. “No wonder you’re non-compliant,” he said. “You have type 1, and you need insulin!”

“That was the first time Dr. Edelman saved my life,” Barbara said.

A few years later, Barbara started losing a significant amount of weight, had practically stopped eating, and could barely get out of bed. Her GI doctor ran several tests and told her she had diabetic gastroparesis. Barbara sent the test results to Dr. Edelman who told her it was actually Addison’s Disease. “If Dr. Edelman hadn’t been reading my test results, I would have died. That’s the second time he saved my life.”

Long before Barbara’s diabetes diagnosis, however, David had been experiencing peripheral neuropathy in his fingers and toes. His doctors tested for diabetes but ruled it out, leaving David to live with the mystery and the neuropathy for years. After David and Barbara connected with Dr. Edelman, however, he was able to officially diagnose David with type 2 diabetes. “It was Dr. Edelman who saved me,” David recalled. “Since then I’ve been doing well. I’m able to keep my blood sugars down and my A1c in a good place.”

The neuropathy is challenging, but David’s positive attitude shines through. “I have very little feeling in my fingers and toes. It’s bad, but I can put up with it. I’m able to hold forks, knives, and glasses, and that works out very well. Dr. Edelman put me on Trulicity and it’s helped a great deal. My A1cs are all fine.” Barbara clarified, “They’re actually very low, and he always lets me know how low every time.”

David and Barbara’s appreciation for Dr. Edelman and their dedication to diabetes education are why they have been such generous and longtime supporters of TCOYD.

“We’ve had friends with type 1 and type 2 diabetes and we basically intimidate them into going to the TCOYD conferences,” Barbara said. “We just feel blessed running into Dr. Edelman, and if I hadn’t been complaining and Sandy’s daughter hadn’t recommended me to him, I’d probably be dead. Dr.  Edelman is helping us stay alive!”

David and Barbara have always had a desire to give back to their communities and support causes they believe in. Education in many forms has always been close to their hearts. Barbara was a life-long teacher and worked with students at the elementary, junior high, and high school levels before finishing her career as an adjunct professor at the University of San Diego.

David received his B.S. and Ph.D. in nuclear physics from Caltech and then went on to complete his post-doctoral degree at the Australian National University in Canberra. He and Barbara returned to the U.S. and eventually settled in San Diego, where David became one of SAIC’s very first employees. After a successful career, he dove into community service and became a “professional volunteer”, working with the Girl Scouts, the Natural History Museum, and the Science Olympiad team at La Jolla High School, helping coach the team to multiple national victories.

When David and Barbara got connected to TCOYD, they became ardent supporters and continue to be passionate about helping others gain access to diabetes education and resources. They appreciate that many TCOYD seminar speakers have diabetes and understand what it’s like to live with the condition firsthand.

Barbara explained, “What’s good about Dr. Edelman is he’ll say, ‘So, you went high…no big deal. Here’s what you need to do next time.’ Since he’s diabetic he has experience, he knows what’s going on, and he understands.”

They have words of encouragement and advice to anyone newly diagnosed. Barbara shared, “Be patient, and read the TCOYD book because if you have a problem you can go to the index, find the problem and read all about it,” David added, “And go to the conference! Go all day long – there’s a lot of stuff there!”

Barbara continued, “TCOYD is about taking care of your diabetes. You just have to worry about yourself, and you have to be in charge. You have to learn. And with TCOYD and all the videos, it’s a godsend because people can learn, it doesn’t cost anything, and you can go back and replay the videos anytime.”

“I’ll never forget,” Barbara recalled, “I was at a TCOYD conference once and a woman was complaining that her daughter (with type 1) didn’t wipe down her injection site with alcohol before giving herself a shot. Dr. Edelman said to her, ‘Well, did she have clean jeans on? Just be thankful she’s injecting.’ He tells it like it is. He’s very bright, he’s compassionate, he cares, and it makes a difference.”

If you would like to help make a difference to people living with diabetes around the world, please click below.