How to Keep DKA at Bay: Signs, Symptoms, and Solutions 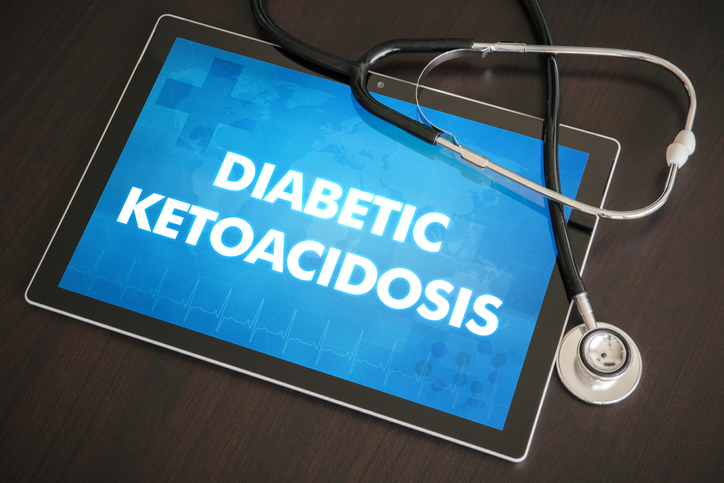 Diabetic ketoacidosis, or DKA, is a complicated condition that every person with type 1, and certain people with type 2 who are on insulin, need to know about. You need to know what it is, how to prevent it, and how to treat it if it does occur.

Some of us tend to think DKA only happens to people who are “bad diabetics” or when someone is first diagnosed with T1D, but it is not uncommon. About 5% of type 1s will have an episode of DKA every year. It’s a very serious acute complication of diabetes that can lead to emergency room visits and hospitalization, and it can be life-threatening.

Let me first describe what ketones are. The important thing to know about ketones is that they really have nothing to do with what your blood sugar is. Ketones are formed in your body when you do not have enough insulin, or you lose access to insulin. This can happen if your pump falls out, if you have a clogged infusion line, if you miss an insulin dose, or if you get really sick and do not keep up with your insulin needs (which go up with illness).

When a severe lack of insulin occurs, your body enters into a sort of starvation mode because there is an insufficient amount of insulin to help get blood sugar into your cells for energy. Your body starts burning massive amounts of fat for fuel, and this process produces acids called ketones. Ketones are a really good energy source, especially for the brain, so that’s why they’re generated. But when ketones build up in the blood, they make it more acidic, and when too many ketones are produced too quickly, they can build up to dangerous levels.

The two most common causes of DKA are:

Other causes of DKA include:

What Are the Symptoms of DKA?

For a lot of people, when they go into ketoacidosis for the first time (other than when they were perhaps first diagnosed), it doesn’t always dawn on them that it could be DKA. You may feel like you have the flu. You may have muscle aches or fatigue, your blood sugar may be elevated…but your blood sugar also may not be elevated. And that’s when some people can get fooled. There is a medical condition called “Euglycemic DKA” which occurs when your blood sugars are just not that high. Euglycemic DKA can happen to people with type 1, and also to people with type 2 diabetes who are taking an SGLT-2 inhibitor (e.g., Farxiga, Jardiance, Invokanna). If you’re on an SGLT-2, keep an eye out for DKA symptoms and report them immediately to your healthcare provider if they occur. But first, institute therapy at home or wherever you are to try and avoid an emergency room visit or hospitalization.

If untreated, more severe symptoms can appear quickly, such as:

What Should You Do If You Think You Might Be In DKA?

Let’s say your blood sugar is 350 and you’re not feeling well.  What should you do? The first thing to do is think, Am I going into ketoacidosis? It’s not an all-or-nothing occurrence. Sometimes it takes time to build up. If you think you might be in DKA, test your ketones. Do you have a ketone meter at home? There are blood ketone meters that are pretty cheap – you can get one on Amazon. The strips are a little expensive (about $1/per strip) but you don’t need many of them. Check your ketones when you think you might have symptoms, and if the number is over 1 mmol/L, that’s when you’re getting into a problem area. There are urine test strips for ketones as well, but they’re not as accurate. They’re cheaper and you don’t need a meter, and perhaps a good screening test if you’re not feeling well.

If You Check Your Ketones and They’re Elevated (1.5 mmol/L, for example) What Do You Do?

The first thing you should do is give yourself a ton of insulin if your blood sugar is high (when you are in DKA your body is resistant to insulin), and at the same time, start drinking non-caloric fluids. The third thing you should do is take 30 grams of fast-acting carbs, which will turn the brain metabolism from ketones back to glucose, which shuts off the ketone production. I’ve seen this turn things around very quickly. Most people wonder why you would be taking carbohydrates if you’re sick and/or your blood sugar’s high, but that’s really key!

And the type of insulin you use is really important. Make sure to use an actual injection of fast-acting insulin with a syringe or a pen, because if you’re on a pump, chances are the catheter is actually the problem. So take a big correction bolus with a syringe, and change out the infusion site immediately because it’s probably part of the problem. Check your blood sugar at least every hour and keep blousing at least every one to two hours until your blood sugar comes down. If you are wearing a CGM you should follow the glucose values and the trend arrows closely.

How Do You Know If You Should Go to the Emergency Room?

If you’re hurling, vomiting, puking…use any verb you like, but if you can’t hold anything down, you’re not going to be able to get better on your own. If you go to the emergency room, they’re going to do the same things I mentioned above – give you fluids and insulin – but they’ll be able to give them to you through an IV line.

One final tip: if you’ve never used a ketone meter, be sure to check your ketones a couple of times when you’re feeling well (not ketotic) just to get an idea of what a typical baseline value is, and also so you get familiar with how to use the ketone meter. Stay DKA Free!