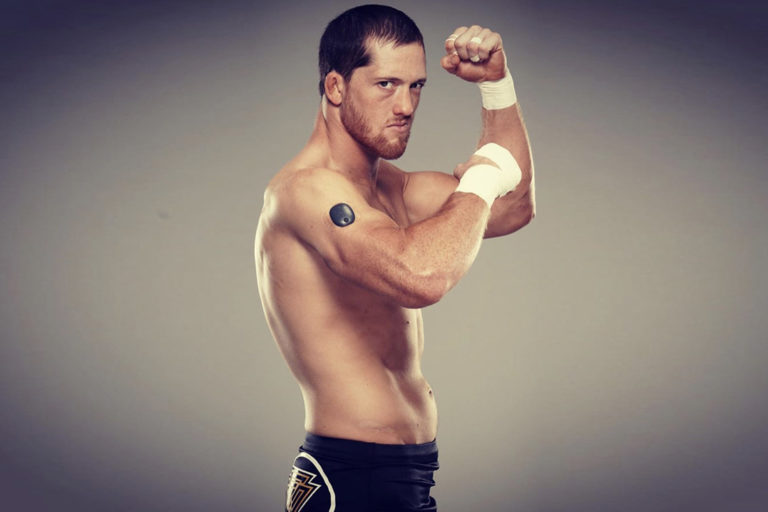 With a long road ahead, Kyle’s road got even bumpier when six months into his training he started feeling sickly, experiencing symptoms of rapid weight loss and extreme thirst. When he went in for a routine physical to get approved for his state wrestling license, Kyle’s doctor was surprised that Kyle didn’t mention anything about diabetes and was even more surprised to find out he had no idea he even had diabetes! Kyle was diagnosed with Type 1 diabetes right then and there.

“I was diagnosed on the spot and it was a life-changing incident, obviously, but because I was so determined to take a stab at this dream of pro wrestling it didn’t really faze me. I was like ‘What do I have to do to get back on track? What do I have to do to get healthy again?’ And as soon as I was using insulin therapy, I started to gain weight and feel healthy. With a new diabetes diagnosis, I had to pump the breaks a little bit. When you think about a life of professional wrestling and traveling you think it’s probably going to be impossible to manage [diabetes] but here I am, 15 years later, wrestling for the biggest company in the world with Type 1 diabetes. It’s a testament to how this [condition] can empower people, make them stronger and healthier, and keep them accountable to their own wellbeing and health. I honestly feel like it was a total blessing in disguise.”

Kyle knew that making it in the professional wrestling business was already going to be difficult, and with his doctors telling him to find another path, it only fueled his fire. “I was able to take something a lot of people would see as a negative and turn it into a positive. This is my own story of being told ‘no, you can’t do it.’ Nobody makes it in the wrestling industry without being told no a hundred times and I wasn’t going let this [diabetes] dictate what I could and couldn’t do.”

Eventually Kyle made his dream a reality when he was signed to World Wrestling Entertainment (WWE) as part of its live-televised event program, NXT, which has nearly 1 million viewers. As part of the Undisputed Era stable (a team of 3 or more wrestlers), Kyle is record three-time NXT Tag Team Champion, a household name in the wrestling world and shows no signs of slowing down. With all the demands of the job, Kyle continually works to make sure his diabetes is under control. “Routine is key in managing this, but because my schedule is all over the place—we’re traveling constantly and managing the stress and pressures of performing at an elite level—stress and anxiety can affect my blood sugar.” Kyle notes his blood sugar is usually high at the end of a fight, but now aware of this trend, he uses his CGM to monitor, adjust and understand how to get back on track. “Before I had a CGM I was checking my blood sugar all the time, more than any doctor would recommend, just because I’m a bit neurotic and always want to know what’s going on with my body. The ability to check my blood sugar in real-time with my Senseonics Eversense has changed my life.”

When he started publicly opening up about his diabetes, Kyle received endless positive feedback as people responded to his story by sharing their own personal journey with diabetes. “I never thought people could take the story of my journey and help themselves, so as soon as I realized that, I thought it was irresponsible for me to not open up and talk about it. It makes my day to know that I can inspire people to live a healthier lifestyle and not let Type 1 diabetes dictate their life.”

Kyle now uses his public platform of nearly 500,000 social media followers and millions of WWE fans to spread his message: “As a Type 1 diabetic it’s your responsibility to control it and not let it get you down. Never let diabetes become a gloom and doom condition. Use that diagnosis to empower you to become stronger through it and take control of your life.”

In addition to catching Kyle on NXT, you can follow him on the road on online: