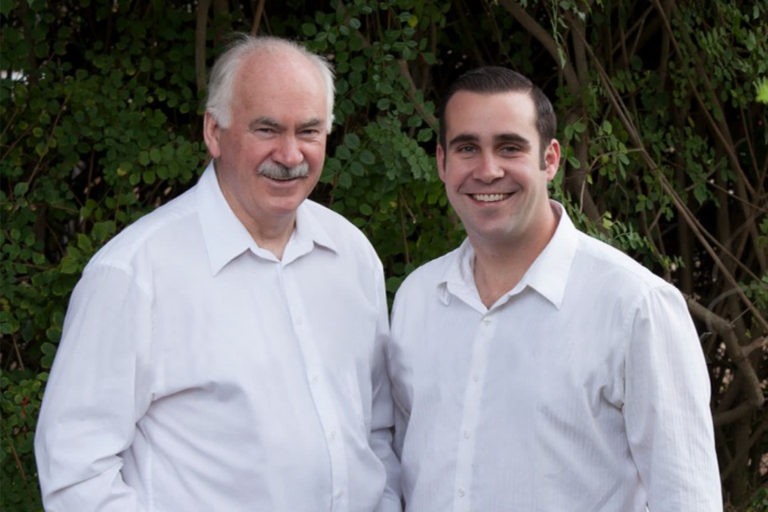 John Pierce doesn’t remember much about his diabetes diagnosis since he was only four years old at the time, but his father, John Sr., is a clinical medical researcher and had actually written a research paper about juvenile diabetes shortly before his son was symptomatic. Since John Sr. recognized the signs, he got his son treatment quickly, but the care he received after being admitted to the hospital took a bumpier path. The medical team was not well versed in diabetes management, and they would repeatedly give John Jr. fruits and sugary sweets to treat lows, followed by doses of insulin when his blood sugar would skyrocket. It was a vicious rollercoaster that left the Pierce’s frustrated early on with the lack of diabetes knowledge in the medical community, as well as the lack of education provided for patients and family members.

Thankfully John Sr. knew enough about diabetes to start taking action. He and his wife Nuri moved their family across the country from Washington, DC to San Diego, primarily because of the weather. John Sr. knew San Diego would be a good place for their son to stay active. “Exercise is critical in diabetes. It’s important post-prandial to get your blood sugar under control, and exercise is one of the best ways to do it. To me that meant being able to run outside all year.”

While John Jr. was running around in the warm San Diego sun, Nuri took on the role of diabetes management lead, doing her own research and taking care of things on the home front. “The diagnosis meant my wife wasn’t able to work because someone had to be there to make sure things went well. It was a family-changing event, and it is for everyone I know who has a juvenile diabetic.”

They tried to find support groups and healthcare providers who were knowledgeable about diabetes but it was challenging, and John Sr. saw other parents struggling with the same frustrations. “Kids would have these highs and lows and the parents wouldn’t know what to do. They would only use orange juice to treat lows and wouldn’t think they had to have something to maintain the sugar level. They just didn’t know. The lack of knowledge was the biggest thing we saw, which is why we’re so supportive of TCOYD.”

In his quest for education and better medical care, John Sr. sought out diabetes specialists at UCSD where he worked, and he got connected with Dr. Edelman. John Jr. was a fan from Day 1. “Dr. Edelman’s been fantastic. When I first started going to him, I remember thinking that having a doctor who’s also diabetic was so great. Someone who understands the ins and outs of diabetes and how difficult it can be at times. He gets everything you’re going through, and he knows all the cutting-edge technology.”

Several years ago, John Jr. started having some kidney complications that led his dad to look into the kidney donation process. In California, there are over 80,000 people on a waiting list for a new kidney. That staggering number prompted John Sr. to explore the kidney voucher program through the national kidney registry.  The program allows donors to donate their kidney years before their intended recipient may need one. UCSD was the first San Diego transplant program to implement the voucher program, which was started in 2014.

The kidney donation process was very smooth for John Sr. “I went through the kidney transplant unit at UCSD and they almost fall over backwards when someone says they want to donate. They check you out thoroughly beforehand, and everything is done on the health insurance of the recipient. And they do two years follow-up after you’ve done it.”

John Jr. is obviously very grateful to his dad. “I’m very thankful to him. He jumped in, no questions asked. Even though I don’t need a kidney now, with this program, when someone donates for you, you get a credit which is great because it encourages more donations. Being able to extend the time period encourages a lot more matches, and someone like myself can take advantage. You try to go as long as you can before you replace a kidney because typically the donated kidneys only last 10-20 years, so I want to try to keep my natural one going as long as possible.”

One thing that’s helped with that has been John’s transition to Looping. His tech savvy sister Tessa was instrumental in getting John connected on Loop. It’s been a game-changer for him, his control, and how he feels overall. Even after years of living with diabetes, it’s still a family affair for the Pierces. Diabetes doesn’t only affect the person living with it, and when you have a support system in your corner, it can make all the difference.

Diabetes education, and now kidney donor education, are both priorities for the Pierce family, particularly John Sr. “I think we should be promoting kidney donation even more, especially within families. Grandparents can donate for their kids or their grandkids. There are lots of people in their 60s who can donate a kidney without a problem if they’re reasonably healthy. If the recipient doesn’t need the kidney for ten years that’s okay, but at least they have it, and when they do need it they jump to the top of the queue. If it gives your dependent the chance to live a full, healthy life, why wouldn’t you do it?”

For more information on the kidney foundation and the kidney exchange/voucher program, please visit https://www.kidney.org or kidneyregistry.org.  If you would like to contribute to diabetes educational programs, please click below.