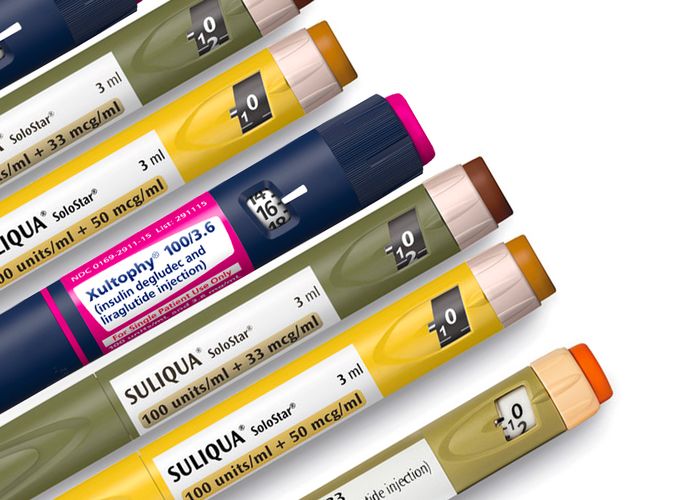 Achieving glucose goals is a critical part of overall diabetes management. The better the glucose control the lower the risk of long-term complications . Taking two or more glucose-lowering medications is usually needed in people with type 2 diabetes to achieve normal or near-normal glucose control.

This often means adding a long-acting basal insulin (for example, Lantus, Toujeo or Tresiba) to oral medication(s). Basal insulin primarily lowers fasting glucose and glucose levels before meals. If basal insulin and oral medications do not adequately lower overall glucose control, a commonly accepted next step in treatment is to add an injectable GLP-1 receptor agonist (RA) such as Byetta or Bydurion, Victoza, Trulicity, Tanzeum or Adlyxin. These medications primarily lower glucose values after meals and may also have effects on fasting glucose. Important to people with type 2 diabetes, the GLP-1 RAs often lead to weight loss. Treatment with a basal insulin and a GLP-1 RA makes a lot of sense since both fasting and post-meal glucose are addressed, helping to lower blood sugar levels further.

“Both new fixed-ratio combination products provide people with type 2 diabetes and their providers with a treatment option that is convenient, easy-to-use, and works to safely improve glucose control by combining two medications with different mechanisms of action in one pen device.” –Dr. Juan Frias

Until recently, people using basal insulin and a GLP-1 RA had to do so by administering each medication separately, therefore needing two separate injections.  The FDA recently approved two products that combine basal insulin with a GLP-1 RA in one pen device. The two so-called “fixed ratio combination” products are Soliqua 100/33 and Xultophy 100/3.6. In published clinical trials, both combination medications were shown to result in better glucose control than basal insulin or a GLP-1 RA alone and with the added benefit of weight loss (rather than weight gain seen with insulin alone). Both medications did so without increasing the risk of hypoglycemia, and with fewer gastrointestinal side effects (e.g., nausea, vomiting, diarrhea) than with a GLP-1 RA alone. So, basically, these combinations offer better glucose control with lower risk of adverse effects than the individual components alone.

Soliqua 100/33 is now available in the US and Sanofi, the manufacturer, provides a $0 co-pay card for qualifying commercially insured people as well as a COACH Program that provides support to people using the medication. Information on both programs can be found at soliqua100-33.com.  Xultophy 100/3.6 should be available in the US very soon and the manufacturer, Novo Nordisk, will likely have programs to support its use. Both new fixed-ratio combination products provide people with type 2 diabetes and their providers with a treatment option that is convenient, easy-to-use, and works to safely improve glucose control by combining two medications with different mechanisms of action in one pen device.