Live Long and Prosper with Kerendia, a New Medication for Type 2 Diabetes 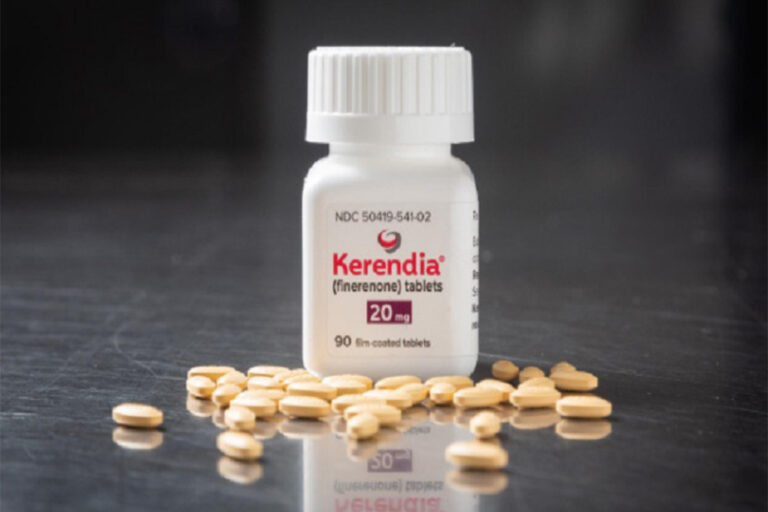 Diabetes management extends beyond glycemic control; it also includes the goal of lessening potential complications. Many medications focus on improving blood sugar, but there have been few advancements in medications that specifically address managing the complications of diabetes, such as diabetic kidney and cardiovascular diseases.

Chronic kidney disease (CKD) is present in over one-third of adults with diabetes, and because it’s such a serious condition, interventions are needed to reduce its incidence and help people live a long and prosperous life.

Currently, renin angiotensin blockade with ACEi/ARB (e.g., Lisinopril and Losartan) and SGLT-2 inhibitors (e.g. Empagliflozin and Dapagliflozin) are the medication-based treatment options for reducing kidney disease in people with diabetes. These treatments, while effective, are often not sufficient. The risk of progressive kidney disease may persist even with the use of these therapies, further emphasizing the need for additional medical treatments.

Fortunately, a new medication has been developed to address kidney disease in people with diabetes. As of July 2021, the FDA approved Finerenone (Kerendia®), a new medication for the treatment of CKD in patients with type 2. Finerenone has demonstrated benefits in decreasing diabetic kidney, and has also been shown to reduce the incidence of cardiovascular disease.

How Does Kerendia Work?

The mechanism of Kerendia is complicated and very medical. Finerenone is a nonsteroidal selective mineralocorticoid antagonist. It works by preventing the activation of the mineralocorticoid receptors that have been implicated in the progression of diabetic kidney disease through a variety of destructive mechanisms such as fibrosis and inflammation. And drug that lowers fibrosis and inflammation will be beneficial to the heart and kidneys. Thus, Finerenone use lowers the amount of these damaging processes in the kidneys, resulting in a reduction in the development of diabetic kidney disease.

The primary goal of the FIDELIO-DKD trial was to evaluate the extent to which Finerenone decreased the risk of primary outcome events, which were defined as (1) a significant reduction in renal function, (2) progression of kidney failure, or (3) renal-related death. When individuals taking Finerenone for 2.6 years were compared to those taking the placebo, primary outcome events occurred in 17.8 % of participants who took Finerenone compared to 21.1% for those who took the placebo.

A secondary goal of the FIDELIO-DKD trial was to evaluate Finerenone’s ability to decrease cardiovascular deaths, non-fatal heart attacks, non-fatal strokes, and heart failure hospitalizations. Of the participants who received Finerenone rather than the placebo, 13% of them experienced cardiovascular deaths, non-fatal heart attacks, or heart failure hospitalizations. This was less than the 14.8% of participants taking the placebo who experienced those events. The trial did not identify a statistically significant reduction in non-fatal strokes between the placebo and non-placebo groups.

The FIGARO-CKD trial was a second study to evaluate the effectiveness of Finerenone. The trial again was randomized and double-blinded, with a placebo group and a non-placebo group.

Is Kerendia Right for You?

Finerenone is another therapy to address CKD in individuals with diabetes. It typically should be used in conjunction with ACEi/ARBs.

Finerenone can cause electrolyte disturbances and low blood pressure in a minority of individuals. Additionally, several medications have the potential to interact with Finerenone (e.g., diltiazem, verapamil, and erythromycin) and therefore should not be used in conjunction with Finerenone. Finally, a diagnosis of adrenal insufficiency is a contraindication to using Finerenone.