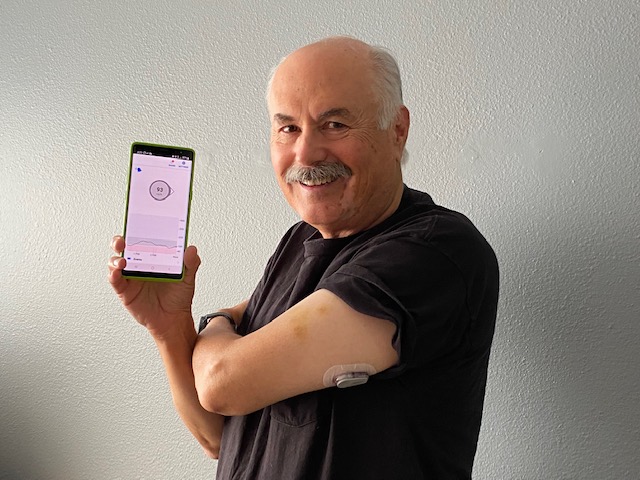 Continuous glucose monitors have been the standard of care for people with type 1 diabetes for years, but they’re an invaluable tool for anyone living with any type of diabetes, and they’re quickly becoming more commonplace in the type 2 community.

Robert Cudlip was diagnosed with type 2 diabetes in 1998, and he managed it like most people with diet, exercise, medication, and finger sticking. But his control really improved once he began wearing a CGM a few years ago. He started with a FreeStyle Libre and then switched to the Dexcom G6 because he was considering an insulin pump. He nixed the pump but kept the Dexcom, and it’s been his diabetes ally ever since.

“I like that the Dexcom checks my blood sugar every five minutes. It’s very helpful in tracking my blood glucose levels and letting me know the trends of going up or going down, and also how fast my glucose is rising or falling so I can take action before the level drops too low or increases too high.”

In addition to the trend arrows, Robert uses the customizable alarms to help keep him on track.

“I set the alarm levels so if it gets down to 80 it will let me know I’m about to go low so I can fix it. Similarly, if I don’t want it to go over 180 I set it at 170, and it lets me know with hopefully enough time to keep it from going over 180, or at least not much over 180. I want to maintain as high a percentage of time in range as possible.”

Time in Range is the percentage of time spent between 70-180mg/dL, and Robert is laser-focused on achieving his TIR goals. “I had a pretty impressive time in range up until a couple of weeks ago – 95%. I was really pleased with that but then I went on a trip. My 90-day report says my time in range is now 92%. I wish it were a little higher – I’ve got to get more disciplined on those vacations!” (We think the only discipline you need on vacation is to master the breaststroke so you can get to the swim-up bar as fast as possible, but everyone’s different). And 92% TIR is nothing to sneeze at. According to Dr. Edelman, an average TIR goal for most people is 70%, or above 50% for people with other serious medical conditions or advanced age.

Knowing what your blood sugar is doing is an empowering piece of information that can give you peace of mind, improve your quality of life, and positively impact daily activities that people without diabetes don’t ever think twice about. Now that things have eased up more with the pandemic, Robert has started swimming more and his CGM allows him to know his blood sugars before and after a workout. It’s real-time feedback at your fingertips in an easily digestible format.

“Overall the device is very easy to use. The interface is straightforward and the information is laid out clearly and understandably. I especially like that there is an app for use with my android phone, and I appreciate the Clarity app and the reports it generates for me and for my doctors.” The Dexcom CGM allows Robert to share his numbers in real time with concerned friends and family so that they can be alerted also if Roberts gets dangerously low.

Currently, CGMs are covered primarily for  people with type 2 diabetes on three or more injections of insulin per day (or on an insulin pump) for Medicare and most insurances, but when they become more widely available for anyone with diabetes or pre-diabetes, they can be game-changers.

“We’re very lucky to have this technology available,” Robert says. “It lets me feel like I’m better at controlling my diabetes. I have input as to what it’s going to do, and with luck I can prevent and control possible problems that can arise. And that makes me very happy and allows me to feel safe.”