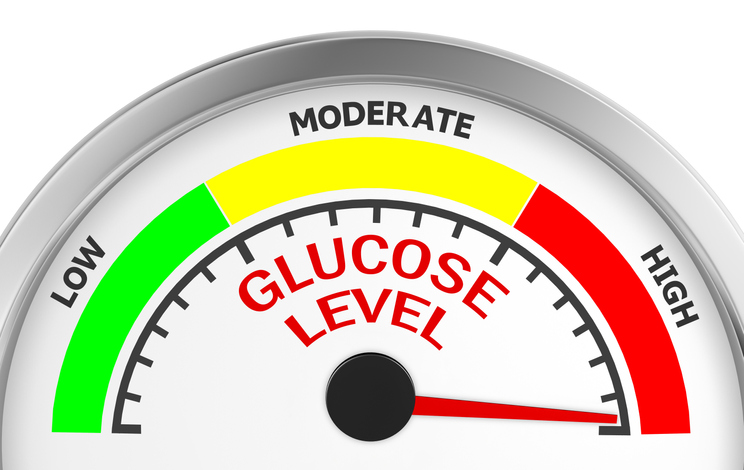 Good news!  The diabetes world no longer revolves around the A1c.  Time-in-range and glucose variability play a much greater role.  We also know more than ever about the harmful effects of after-meal blood sugar spikes.

What’s a Blood Sugar Spike?  And Why Do They Happen?

Postprandial spikes are temporary high blood sugars that occur soon after eating.  It is normal for the blood sugar to rise a small amount after eating, even in people who do not have diabetes.  However, if the spike is too high, it can affect your quality of life today and contribute to serious health problems down the road.

The reason blood sugar “spikes” is a simple matter of timing.  In a non-diabetic, consumption of carbohydrate results in two important reactions:  the immediate release of insulin into the bloodstream, and production of a hormone called amylin which keeps food from reaching the intestines too quickly.  In most cases, the after-meal blood sugar rise is barely noticeable.

However, in people with diabetes, the situation is like a baseball player with very slow reflexes batting against a pitcher who throws 98 mph fastballs: the timing is not good.  Rapid-acting insulin that is injected (or infused by a pump) at mealtimes takes approximately 15 minutes to start working, 60-90 minutes to “peak,” and four hours or more to finish working.  And don’t forget about the amylin hormone effect.  In people with diabetes, amylin is either produced in insufficient amounts or not at all.  As a result, food digests even faster than usual.  The combination of slower insulin and faster food can cause blood sugar to rise absurdly high soon after eating.  This is followed by a sharp drop once the mealtime insulin finally kicks in.

Why Are Blood Sugar Spikes a Problem?

Even though the spike is temporary, all of those spikes throughout the day can raise your HbA1c.  Research has shown that for those with an A1c below 7.5%, post-meal readings actually have a greater influence on A1c than fasting blood sugars.  In other words, managing pre-meal readings will only get you so far.  If you want tight control, you need to pay attention to the after-meal glucose as well.

The long-term effects of postprandial hyperglycemia have been studied extensively.  For those with type 1 diabetes, significant post-meal rises have been shown to produce earlier onset of kidney disease and accelerate the progression of existing eye problems (retinopathy).  And like a dagger through the heart, post-meal hyperglycemia is an independent risk factor for cardiovascular problems.  Recently, post-meal spikes and glucose variability have been associated with diminished brain function and an increased risk of dementia.

But the problems are not limited to long-term health issues.  Any time blood sugars rise particularly high, even temporarily, our quality of life suffers.  Energy decreases, cognitive (thinking) ability falters, physical/athletic abilities become diminished, and moods become altered.  And don’t forget:  What goes up must come down.  The rapid blood sugar decline that usually follows a post-meal spike can cause false hypoglycemic symptoms.

The exact timing of blood sugar spikes can vary from person to person and meal to meal.  However, on average, the post-meal peaks tend to be about one hour and 15 minutes after starting a meal.  But the best way to measure post-meal patterns is by using a continuous glucose monitor (CGM).  These systems, available from Medtronic, Dexcom, Abbott and Senseonics, provide glucose readings every couple of minutes so you won’t miss the peak, whenever it happens to occur.

So exactly how high is TOO High?  There is no universal answer.  The American Diabetes Association recommends keeping blood sugar below 180 mg/dl 1-2 hours after eating.  However, no specific guidelines are provided for type-1 vs. type-2 diabetes, insulin users vs. non-insulin users, or children vs. adults.

Based on my experience, I usually recommend the following:

Post-meal readings that are consistently above these levels should be addressed by you and your healthcare team (see strategies in the sections below).

How to Control a Blood Sugar Spike

To reduce the spike, a number of strategies can be used.  Some involve medications while others involve our lifestyle choices.  Here are a few medical approaches:

The right insulin can make or break your ability to control those after-meal spikes.  In general, insulin that works quickly and for a short period of time will work better than those that work slowly over a long period of time.

For instance, rapid-acting insulin analogs (Humalog, Novolog or Apidra) will cover the post-meal blood sugar rise much better than regular insulin.  Newer ultra-rapid insulins, such as Fiasp, work even faster.

The way insulin is administered can dramatically affect its speed of action.  Afrezza is an inhaled insulin that can be used at mealtimes.  Because the dry powder is absorbed through the lungs, its onset and peak are much earlier than injected insulin.  For those who don’t mind a twinge of pain, injecting insulin into muscle will also make it absorb and act much quicker than injecting it into the fat layer below the skin.

Research has also shown that injected insulin can work much faster when the injection site is warmed by rubbing the site, immersing in warm water, or exercising the muscle near the site.  Warming the site causes the blood vessels near the skin to dilate, which allows the insulin to absorb more quickly.  By the way, smoking causes the blood vessels to constrict, so quitting smoking might improve your post-meal blood sugar (in addition to helping you and those around you to live longer).

2. Back Up Your Bolus

For those taking rapid-acting insulin at mealtimes, the timing of the injection (also called a “bolus”) can have a huge impact on the after-meal spikes.  Unless you suffer from gastroparesis, it is best to give boluses before eating.  How long before?  It depends.  The higher your blood sugar, the earlier the bolus should be given.  With a pre-meal blood sugar that is well above-target, it is best to give the bolus and then wait 30 minutes before eating.  Near your target blood sugar?  Wait 15 minutes.  Below target?  Take the bolus and eat right away.  Research has shown that simply giving mealtime boluses before eating rather than after can reduce the post-meal spike by an average of 45 mg/dl.

3. Bolus for the Basal

In order to have more insulin working right after eating and less working several hours later, a pump user can run a substantial temporary basal reduction for 3 hours just before eating and give a normal bolus equal to the basal insulin that would have been delivered.  John Walsh, coauthor of the Pumping Insulin books, calls this a “Super Bolus”.   For example, if your basal rate in the morning is .6 units per hour, you could bolus an extra 1.8 units before breakfast and then set a temp basal of 10% (90% reduction), for the next 3 hours.

Two classes of injectable hormones, GLP-1 receptor agonists and amylin mimetics, have powerful effects on post-meal blood sugar.  Both GLP-1s and Symlin slow gastric emptying and keep carbohydrates from raising the blood sugar too quickly after meals.  Symlin, which is a replacement for the amylin hormone (which is lacking in people with diabetes), also helps to diminish appetite and blunt post-meal glucagon secretion.  GLP-1s blunts appetite and promote the growth of insulin-producing cells in the pancreas of those with type-2.  So both can contribute to better post-meal blood sugar control.

For type-2s, the choice of oral medication can also impact your after-meal control.  Sulfonylureas stimulate the pancreas to secrete extra insulin throughout the day, without regard to meal timing.  There are alternative medications called meglitinides which also stimulate the pancreas but do so in a much faster and shorter manner.  When taken at mealtimes, meglitinides produce better after-meal control than sulfonylureas.

Glycemic Index (GI) refers to the speed with which food raises the blood sugar level.  While all carbohydrates (except for fiber) convert into blood sugar eventually, some do so much faster than others.

Many starchy foods (breads, cereals, potatoes, rice) have a high GI; they digest easily and convert into blood sugar quickly.  Some starchy foods (pasta, beans, peas) have lower GI values.  Foods that have dextrose in them tend to have a very high GI.  Table sugar (sucrose) and fructose (fruit sugar) have moderate GI values, while lactose (milk sugar) is slower to raise blood sugar.  A number of books, such as Dr. Jennie Brand-Miller’s Glucose Revolution series, contain extensive information about the glycemic index, along with lists of GI values for hundreds of foods.

As a general rule, switching to lower-GI foods will help to reduce your after-meal blood sugar spikes.

Below are some examples of ways to substitute typical high-GI foods for lower-GI options: 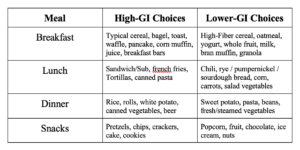 Another unique food property that affects rate of digestion is acidity.  This is why sourdough bread has a much lower GI value than regular bread.  Research has shown that adding acidity in the form of vinegar (straight or in dressing/condiment form) can reduce the one-hour post-meal blood sugar rise by 50% or more.

When having a full meal or large snack, consider saving a portion for one or two hours later.  Still give the full mealtime insulin before eating any of the meal; just don’t eat all of the food at once.  For example, if you have a bowl of cereal and juice for breakfast, considering having the cereal at breakfast time, and postpone the juice until mid-morning.

Physical activity after eating can reduce post-meal spikes by diverting blood flow away from the intestines, resulting in slower absorption of sugars into the bloodstream.  Plus, the sugar that does enter the bloodstream is likely to be “consumed” by the working muscles.  It doesn’t take much activity:  Ten or 15 minutes (or more) of mild activity will usually get the job done.  The key is to avoid sitting for extended periods of time after eating.

Low blood sugar is problematic in many ways.  One of the body’s typical responses to hypoglycemia is accelerated gastric emptying:  food digests and raises blood sugar even more rapidly than usual.  Prevention of hypoglycemia prior to meals and snacks is yet another effective strategy for controlling post-meal blood sugars.

Gary Scheiner MS, CDE is Owner and Clinical Director of Integrated Diabetes Services, a private practice specializing in intensive insulin therapy.  He is author of several books, including Think Like A Pancreas:  A Practical Guide to Managing Diabetes With Insulin, and was named 2014 Diabetes Educator of the Year by the American Association of Diabetes Educators.  Gary has had Type-1 diabetes for 34 years.  He and his team of Certified Diabetes Educators consult with people throughout the world via phone and the internet.   He can be reached at gary@integrateddiabetes.com, or +1 610-642-6055.